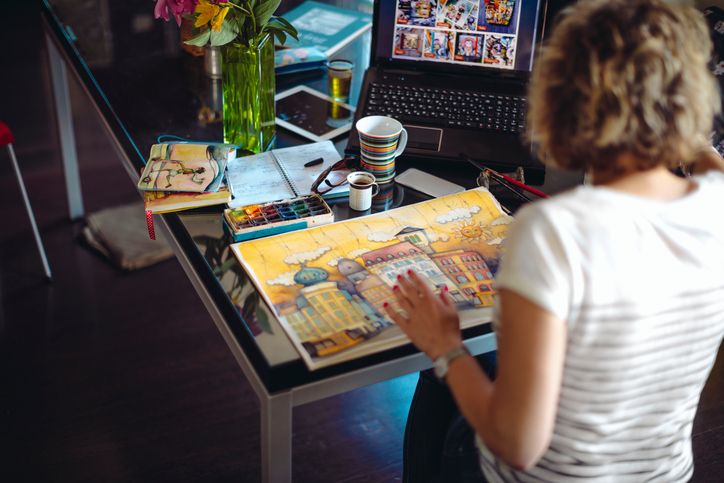 Storyboard artists draw scenes by hand or computer. They might sketch in black and white or they may produce full color storyboards manually or by computer. Also called “storyboarders,” storyboard artists work with producers, directors, and film crew from start to finish by sketching scenes during initial meetings, and editing or eliminating scenes as the project progresses. Storyboard artists may work in a film or other production studio, in an office setting, or even a home studio.

The Bureau of Labor Statistics does not report salary and employment information for storyboard artists as a single group, so another way to get an idea of what storyboard artists earn is to review earnings for illustrators. According to the Bureau, the average salary for illustrators is $44,850 per year. The highest earning illustrators average $91,200 per year and the lowest earners average $18,450 per year. Some story board artists are self-employed, so they may earn quite a bit more or less than the average salaries listed.

Employment of fine artists such as illustrators is projected to grow four percent for the 2012-2022 decade. This means, the talent pool will increase from 28,800 in 2012 to 29,900 by 2022. Projected growth for this occupation is slower than the average for all occupations. However, according to the Bureau, “demand for illustrators who work on a computer will increase, as media companies use more detailed images and backgrounds in their designs.” Further, “new opportunities are expected to arise, as the number of electronic magazines, Internet-based publications, and video games grows.”

Awesome Animation Fact: When it comes to creating likable characters, sometimes it’s best to go back to the drawing board until you get it right. According to Yahoo!7, one of the world’s most loved animated characters, Woody from Toy Story, was originally written to be a type of ‘sarcastic jerk’ who frequently insulted other toys throughout the film. Fortunately, Disney deemed this character totally unwatchable and halted film production until a more appealing personality for Woody was developed. Find out the best team for your storyboard project.