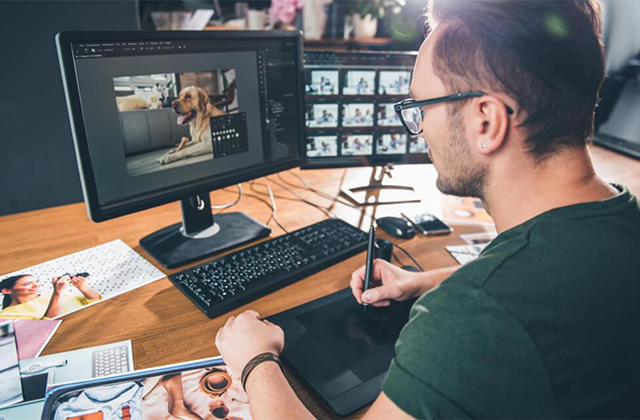 Concept Boards, sometimes called “Mood” boards, are a tool designers use to curate images that convey an overall theme or design concept. As I was re-reading a Sherlock Holmes story on my iPhone with Google Reader app (I like it very much) my eye caught sight a photographic print on the my bedroom wall. I wondered whether the print and paintings, what are considered part of home decor, would be replaced by digital frames in the same way that books are being replaced by eBooks.

Amazon recently proclaimed that they were selling more eBooks than physical books.

Will this digital conversion also replace the physical print in frame on the living room wall?

Were there unique differences between eBooks and a digital picture frames?

At first glance, they do seem different – but I thought it would be interesting to enumerate the differences.

The world has come to the conclusion that reading books is very convenient on digital devices, whether it be an iPad, an iPhone, a Kindle, a NOOK etc. The only screen that I cannot read on for any length of time is my computer screen. No matter what anyone says, I still like to curl up with a good eBook – something that I can’t do with this giant screen.

And more to the point, what exactly was the difference between digital books and digital displays of visual art.

The differences may seem obvious to you – but I felt the need to enumerate these differences because as far as I could see, the digital picture frame had still not caught on, although it was a much simpler thing to do from a technical point-of-view.

1. Give Us Some Style

At first glance (so to speak) the digital book and the digital picture frame seem similar. A book is simply a display of some combination of text and pictures.

The digital picture frame displays images. The frame could be large, though as you begin to approach poster size, price becomes an issue. But smaller picture frames could be purchased, and rather than being able to only show one picture, they could be programmed to show different pictures at different times of the day, or in a random manner – like a screensaver for the wall.

And therein – lies the problem. What is chosen to display on a living room wall is an expression of the owner(s) of that space.

The very fact that it doesn’t change from one image to another, gives it a value because you chose it. Think of it as a bit of interior design. The single unchanging picture in the living room has the responsibility of proclaiming your sense of style, in the same way as the paint on the wall, the furniture in the room, and the lighting mechanism.

The book, at it’s core, is not for display purposes. It’s true that there will always be rare books for display. First printings of rare books, and all that sort of thing. But for most people, books can be enjoyed perfectly well if they are curled up in a nice armchair, or sitting on a plane (ugh), or wherever without needing to be shown as a declaration of who you are.

In terms of style, if the very use of a digital frame becomes a wow factor, a proclamation of your style, then they could become popular. But unlike the benefits of reading a digital book, the digital frame as a style statement has an uphill battle.

The book can be read and enjoyed on any suitable device because it is a set of symbols that you translate in your imagination. The art of telling a story, or writing about history, is not inherent in the physical presentation but in the way that the story or history is told.

It is true, that there is a craft associated with physical books which can make them works of art despite the content – but here we are talking about a separate form of artistic endeavor that will be lost to the digital book reader. Of that there is no doubt. But it is also clear that a time will come when this sort of bookmaking craft will be rare – and that purchasers of well-made physical books will do so as investments and read them (if they dare) with white cotton gloves on.

The question is whether a viewer can get the same enjoyment from a digital picture frame as from an original physical print?

That digital frame on the living room wall is always there. It can be turned on or off. It can show art, or turn into a video screen. But this very ability to display anything (unlike the case with the digital book) will make it harder to enjoy. Even if you only have one digital image in it, that image will not have the same aesthetic value as a physical print.

This ability to display anything removes the personality behind the images.

Some laptop makers now offer different covers as an option. The way the laptop looks, rather than what it does, is an important fashion statement.

The well-crafted artistic books that I mentioned before will become more interesting because they can’t morph into something else.

In short, even if a digital frame had the same “look” as a traditional painting or print, knowing that you were looking at a digital representation that could be changed with the press of a button – will make the presentation less enjoyable.

Efficiency is not the key to enjoyable art. Can you imagine Renoir exclaim to his fellow painters: “Hey guys! Watch this. Now we can flip through my pictures with the click of my smartphone.”

Edward Weston used to do something like that. Ansel Adams writes (and I’m paraphrasing) that Edward would invite friends over and have a stack of small contact prints, perhaps they were 5 x 7’s.

He would put each one on a small easel for his friends to look at. Then without saying a word, remove it and place the next one on the easel. And so on until the little show was over.

Then they would talk.

But this was not a slideshow, or a digital frame with a clicker. These were original prints – and I just can’t imagine a time where a print will turn into a slideshow; whereas I can easily see a time when only the very wealthy have what we used to call books. Books are always the source of information.